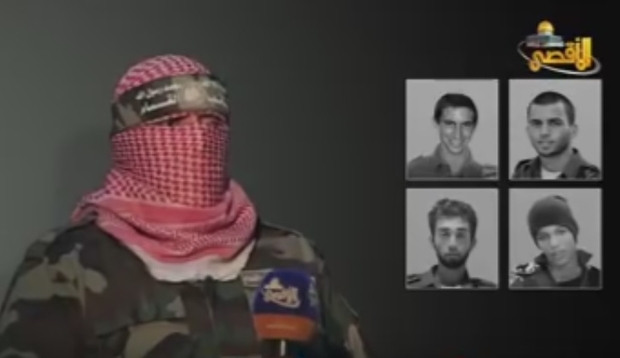 The last Israeli war on Gaza, which was dubbed “Protective Edge” and claimed thousands of Palestinian lives as well as inflicting massive destruction to Gaza’s infrastructure, is not yet over for Israel.

Despite its massive military campaign against Gaza and the Palestinian movement of Hamas, Israel has failed to retrieve its dead soldiers or those who are still alive. Meanwhile, Hamas is repeatedly seen as flexing its muscles and engaging in propaganda warfare against the Israeli government. Hamas is keen to gain more popular support on the national front by negotiating the release of Palestinian prisoners in a possible future swap with Israel, the way it did back in 2011 when it released Israel’s Gilad Shalit.

Hamas said that the issue of the captive Israeli soldiers is in a standstill since the end of 2014. Unlike traditional warfare where the fighting powers sit and negotiate prisoners swaps or the return of bodies, the question of those soldiers is described by Hamas as a “black box”. Meanwhile, the Israeli government announced its two captive soldiers as dead from the moment of their captivity to avoid paying any future price.

It all begins in Egypt

Since Hamas came to power in 2006, Egyptian intelligence played a central role in the indirect negotiations between the Palestinian movement and Israel. The Egyptian security services mediated the ceasefire of Israeli wars in Gaza in Operation Cast Lead 2008-9, Operation Pillar of Cloud 2012, and the last war Protective Edge 2014. It also mediated the successful Shalit prisoner swap in 2011 where German mediators and others failed.

Yet this time things are different as Hamas and Egypt are no longer in harmony. Egypt-Hamas relations have reached stalemate following the toppling of the Muslim Brotherhood (MB) from power in 2013. Egyptian media, politicians and parliamentarians have accused the movement of being part of the MB and considered Hamas its “military wing”. Some Egyptian commentators went to claim that Hamas is working with Islamic State militants against the Egyptian state in Sinai.

After more than three years of “Egypt isolating Hamas,” all of a sudden, we saw a senior Hamas delegation leaving Gaza to meet the Egyptian intelligence in late March. In the same month, the Fatah movement visited Qatar a number of times to talk with Hamas over national reconciliation.

Some commentators argue that Egypt may be mediating between Hamas and Israel for a prisoner swap deal. Conflicting reports followed the visit of Hamas delegation to Egypt. Sources have told Alaraby.co.uk that Egypt has asked Hamas for information about the captive Israeli soldiers. Hamas has denied the Alaraby revelations. However, the London-based Asharq Al-Awsat revealed that a Hamas source told it that “they are in direct talks with Israel”.

“Hamas has put forward two conditions in these negotiations, first releasing those who were re-arrested after being released in the Shalit swap and the second is that the swap negotiation are to be isolated from other issues (such as easing the Gaza siege and other related matters),” the source told the newspaper.

Many news outlets in Israel confirmed that Egypt has probed Hamas about the “status” of Israeli soldiers in Gaza.

Since the end of 2014 war, Israel showed no interest in negotiating the captured soldiers’ fate with Hamas. It announced their deaths and conducted funerals in a move to tell Hamas they are dead and they have no price. Apparently, Israel is trying to avoid paying a high price in any future swap although public opinion labels those soldiers as missing not dead

A few days ago, Israeli Prime Minister Benjamin Netanyahu announced that there was “progress” in regard to the captive Israeli soldiers in Gaza. His announcement was met with a prompt response from the armed wing of Hamas, the Izzedine al-Qassam Brigades, which described Netanyahu as a “liar” and showed a video of four Israeli soldiers thought to be in captivity.

“Netanyahu is lying to his people and also deceiving the families of the captive soldiers. There are no talks or negotiations relating to the prisoners. The enemy will not get information about the four without paying a clear price before and after the negotiations,” said the spokesman of the military wing, Abu Obeida.

A video released by the military wing confirmed that Hamas is holding four Israeli soldiers in captivity: Oron Shaul and Hadar Goldin (who Israel announced had been killed), in addition to Avraham Mengistu and a Bedouin-Israeli soldier who was thought to be captured by Hamas following the end of Protective Edge.

Netanyahu, who rushed to announce his soldiers were killed in 2014, seems adamant in searching for any clue about them but at no price. Despite announcing their deaths and showing no interest in their fates over the past two years, he seems very interested these days. During his February visit to Germany, Netanyahu requested that Germany act as a mediator for the return the soldiers’ bodies from Gaza.

Parties eager to reach ‘a deal’

Any observer assessing the question of Israeli soldiers in Gaza may deduce that both parties are keen to reach a deal.

Although the consensus in Gaza is that Hamas resistance is crucial and part of the self-determination struggle, it is clear that Hamas’s era in Gaza has been characterised of instability, devastation, siege and wars that are often imposed by Israel. The Egyptian crackdown against the commercial tunnels in Gaza has left the economy of the movement paralysed and showed it unable to deal with the demands of the coastal enclave. Certainly, these elements are harmful for Hamas and affect its popularity.

Hamas is in bad need of a prisoner swap deal with Israel as it will help boost its image in Palestine, particularly in Gaza. It will enable the movement to gain more momentum against its rival Fatah, which has nothing to offer Palestinians except failed negotiations with Israel that went nowhere.

In this regard, veteran Israeli politician Yossi Beilin argued that Hamas is in a very weak position and that Israel should use this to reach a long-term agreement with the movement with the help of Egyptians who block the Rafah crossing.

On the other side, Netanyahu is not in a good position either. According to many Israeli politicians and political opponents, he is harming the image of Israel worldwide and the BDS movement against the country is growing. An Israel Channel 2 opinion survey carried out last month found that Netanyahu’s right-wing collation government will collapse if elections were held now.

Another poll by Haaretz newspaper suggested that “Israelis have had enough of Netanyahu”.

“The country’s senior politicians are surviving in office due to a lack of alternatives, but they are weak and their leadership is brittle. Most of the public is fed up with Benjamin Netanyahu, who this month marks seven consecutive years as prime minister (10 altogether). Israelis want something new,” commented Haaretz on its own poll.

Past experiences teach us that for the Israeli government to continue in power there has to be an achievement or war to unify political forces in the country. At this stage, we may be either awaiting another Israeli war against Gaza, a prisoner swap deal or some other action by Bibi to regain his popularity.