Health services in the Gaza Strip 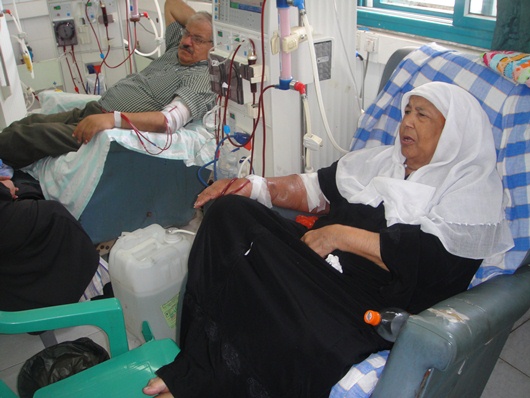 “Our water is unclean, our food and air are contaminated. We have no real immunity against diseases here in Gaza. The health system is creaking and its services don’t meet the basic standards. We are not exaggerating. What’s going on here is different. Even the way the health sector delivers its service to the public is unusual. Our medicines are either more expensive or obsolete; surgery is prohibitively expensive and you have to have personal insurance to get medications, ” said Joma al Bahtini, a Palestinian resident from Gaza.

Joma has been jobless for the past eight years. Just recently he managed to get a job in a local restaurant, earning an estimated 1400 NIS a month, equivalent to £260. When he sought me out asking me to publicise his predicament, he showed me a certificate he carries around with the medical details concerning his family. The family contains seven members who all suffer from the same genetic kidney disease. Joma’s afflicted children rely on medicines being provided on a regular basis by the Ministry of Health. He has applied for a travel permit to take his children abroad for treatment, but has been refused.

This is only one family’s health problem in Gaza. As soon as Israel imposed its ongoing siege, the health sector became a priority target. The vast majority of patients have been prevented from leaving Gaza for so-called reasons of Israeli security. Medicines, medical spare parts and machines have been denied entry into Gaza. Hospitals have not been renovated due to lack of construction materials. The siege on Gaza has claimed the lives of more than 500 patients under these conditions, many of them women and children.

Even prior to Israel’s launch of full-scale war on Gaza, reports showed that the health sector was already in a parlous state. The Popular Committee to End the Siege in Gaza issued a joint report with the Gaza-based Health Ministry in consultation with its hospitals, claiming that the severe shortage of basic medicines had left Gaza 40% under capacity. Medicines for diabetes, heart, asthma and other chronic conditions were unavailable. Medicines for cancer treatment and liver failure faced drastic shortages. The sterilization and disinfecting of medical equipment and clothes had declined by 30%, together with severe shortages in solutions, pigments and laboratory tools. These shortages, it was calculated, amounted to a deterioration in patient care of around 40%.

Thanks to the siege, none of the medical machinery in bad shape had received attention. Children’s incubators were already being affected. Supplies of gases used in surgery had been cut from three months’ strategic supply to seven days. Around 60% of ambulances were out of order and some medical vans as well.

The war came one month after this report was published. Of course, hospitals and health utilities were not able to deal with the number of victims and injuries. Patients were forced to leave the hospitals to make space for three hundred war victims on the first day of the hostilities. Much medical equipment was damaged in the attack. Some, such as the X-ray machines at al Shifa hospital ground to a halt due to heavy overuse, or use by people unaccustomed to operating those machines.

Solidarity groups trying to help from around the world, suffer from a chronic lack of information about what is really needed in Gaza. Sometimes, with enormous efforts, they duplicate equipment that Gaza already has in plentiful supply. More often, they can’t supply the up to date equipment that is needed. According to a Gazan expert in the maintenance of medical equipment, there are only three CT scanners operational in Gaza. One of those machines is in the state-run hospital while the other two are in private medical centres. More than five CT machines are out of order, due to a lack of spare parts. The whole Gaza Strip with 1.7 million inhabitants has only 1 MRI machine. The second is out of order. His list of what is needed begins with mobile X-ray units, mammography X-ray machines and X-ray film-processors and a C-Arm machine for the operating theatre. But he admits that what is needed is too long a list to mention. He says that Gaza needs years not months to make up for its losses.

Meanwhile, Israel plays a cat and mouse game with international public opinion. From time to time, the Israeli government announces that it will allow medical spare parts into Gaza.  But it doesn’t happen on the ground. When it comes to it, the Hamas Health Ministry find themselves dependent on charitable donations. Since European governments, following the American lead, refuse to deal with Hamas directly, not much more than NGO-provided food relief gets through.

A visit to Al Shifa hospital

I headed there early one morning, to find that I was not able to take photos or interview any of the staff. New regulations on journalists had been issued: by the time I had obtained the necessary permission from the Health Ministry the day was over. I returned two days later.

The head of the department for kidney disease patients, Dr. Abdallah Al Qishawi, welcomed me and gave me a tour of his ward. Medical machines in this department had been supplied by the Arab League via Egypt. But the power cuts put the patients at risk, al Qishawi told me,

“When machines stop while patients are having their kidneys ‘washed’, this causes huge problems of blood thrombosis. It means we have to do more frequent blood transfusions and that means that we have 180 patients visiting us weekly. We are always needing more blood supplies to meet this escalating challenge, and of course it puts the patients’ lives at risk.”

Dr. Deeb Muhammed Al Batish, 37, said that the worst problem in the intensive-care unit was the uncertain power supply. Power cuts frequently interrupted their work, and some of the machines needed to be re-started. This process risked the lives of patients. To overcome such a risk, they had to use an artificial breathing technique for patients, which actually demanded both more qualified teams and better human resources than were available to them.

The second problem was general maintenance, given their dependence for spare parts on overseas medical machinery providers. Procuring parts would take months, and this delay was getting worse as the siege continued unabated. In addition, some machines are simply proscribed. For some reason, Gaza is not allowed by Israel to have ESG electroid machines, which measure the pulse of the heart.

Like all other aspects of life in Gaza, health too has been damaged by the Hamas-Fatah split. Fatah’s Health Ministry in West Bank has stopped making medical referrals, alleging that Hamas is privileging its supporters in the treatment of patients: corruption is easy enough to see in the Gazan Health Ministry. Meanwhile, ordinary people suffer more from this Palestinian conflict. When Fatah health workers withdrew their labour, they were inevitably replaced by people who were not qualified for the job.

There are some advantages to enforced isolation. When the whole world was worrying about swine flu, Gaza had not one case to report. We used to joke about how the Israeli siege had withheld this disease along with the other basics of life. Late in 2009, however, it reached the Gaza Strip. Thirty-five people subsequently died of swine flu, a fact denied for a long time by the Hamas Health Ministry. In the end they had to officially concede the facts.