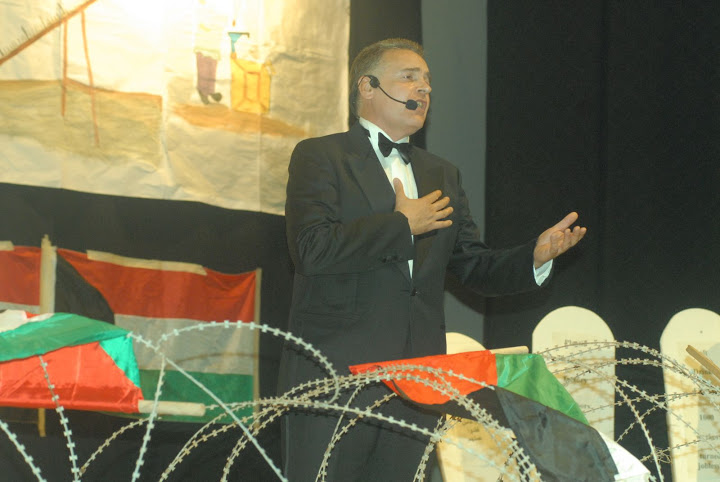 The Gaza Strip has lost 1,400 lives and a further 5,000, mostly civilians, have been maimed and wounded in the latest attack waged by the Israeli government. This came on top of an illegal, yet relentless siege that has dragged on and on for over two years, preventing 1.5 million Gazans from having access to the basic necessities of life, and to the wider world. You might well ask how young people respond to this blockade. Some of course resort to violence. But others have chosen a different tack.

The right to resist derives from the basic values of justice and freedom. It is not confined to the use of force. Millions of people in this world believe in solving conflicts through peaceful means, without shedding blood and causing more hatred. One day this noble struggle could even replace the violence used by humanity against their fellow human beings. Rockets, guns, tanks – as decisive as they are today – have little to say to the wider cultural struggle for a civilised existence.

The first ‘Intifada’ uprising was a Palestinian show-case for a unique kind of resistance in which heavily armed Israeli soldiers were confronted by children with stones. That intifada mutated through several phases before it helped us to secure the Oslo agreement in 1993. More and more Palestinians nowadays are revisiting a non-violent resistance that has emerged from their history if only because it has been so dogged by violent conflict and by war.

In the West Bank, the International Solidarity Movement inspired a non-violent movement of resistance in which locals only became involved when Israel started to build the annexation wall. The people of the Gaza Strip started their movement with a different sort of retaliation, this time against the blanket of silence which was the first stage of Israel’s siege. Our response was ‘voices instead of bullets’. In the Gaza Strip, by mid-2007 we were engaged in numerous actions which drew international activist attention in our direction for the first time.

Sameh Habeeb, who was coordinator for the Popular Committee Against the Siege (PCAS) when Israel closed down all the border points, cut the electricity dead and with-held all fuel supply, remembers that moment as a turning-point:

“At first, there was just a stunned reaction of helplessness. We all rushed around wringing our hands about what could be done. We were entering an extremely challenging phase in which the question was: how to involve a wider public in our activities? Gazans are notorious for their loyalties and their endless capacity for confrontation. We thought we were in for a very difficult time indeed. But it turned out to be easy.

We realized that it was precisely at that moment, so in need of a clear way forward, that we must bring people onto the streets. We issued a call throughout Gaza to everyone who would listen. It took almost 5 days before any media outlets paid any attention to what we were saying. Then it started. Even the Israeli media were calling us to ask what was going to happen next. The Israeli government called on thousands of reserve soldiers who were promptly deployed along the borders with Gaza. We had promised some kind of action on a specific day – and as the day loomed, the Israeli media carried reports speculating on what might occur. Some predicted that tens of thousands of us would break through the borders with Israel.”

The action day arrived and began early with massive media coverage from our side: ‘Human chain to challenge the siege.’ Literally tens of thousands of people of all ages did indeed respond: schoolchildren, university students, labourers, women and children and many ordinary people hurried to the Salah El Din. The chain stretched from Rafah to Beit Hanoun and was around 36 kilometers long. The people went to the borders without guns in the manner of Ghandi to make a united protest. However, accorind to Al Jazeera, clashes erupted between youths and the soldiers who fired at them.

Since that memorable day, Jamal El Khoudary, chair of PCAS has launched numerous symbolic activities to end the siege. “Our approach to struggle has many means at its disposal. This is why Palestinian factions, political parties and individuals across the board participate in our actions. Through non-violent actions, we have been able to move the mainstream. However, you have to face the fact that you are always, at any minute, liable to be fired on.” This is the price we have to pay to call attention to what is happening to us.

On January 26, 2008 the Palestinian International Campaign to End the Siege on Gaza, led by Dr Eyad Sarraj, proclaimed an international day of action against the siege imposed on the Strip. It is important that there is an international response to this call, but at the core of this activity was the coming together of organizations working for peace and solidarity in Palestine, civil society bodies, and human rights advocates and Gazan academics, with Israeli peace activists also wanting to extend solidarity to the people of Gaza in numerous joint actions and events. On that day thousands of activists demonstrated on both sides of the borders between Israel and Gaza. More activists came to Egypt and tried to cross over to Gaza.

The campaign launched a call to gather a million signatures to end the siege of Gaza. Teams of volunteers grouped in villages, towns and neighborhoods of Gaza to collect these names. The aim was to present them to the United Nations, and two hundred thousand signatures had been secured when all this was brought to a rude halt by the Israeli war.

Dr Eyad Sarraj, who is amongst various callings, an international peace campaigner said on that day, “The principal goal of this demonstration is to join the hands of both Israeli and Palestinian peace activists who want to end the siege and all kinds of violence. The most decisive factor in breaking the siege will be through a change in Israeli public opinion.”  The slogans were: ‘No Movement, No Life’ and ‘Humanity, Not Humiliation: Peace, Not Punishment’.

By late 2008 this movement of civic protest was growing new dimensions. Seeing the Palestinians so committed to such actions, international support of various kinds began to build.  The Free Gaza movementmanaged to send three boats into Gaza surrounded by such a media fanfare that the Israelis were not able to touch them. The sea of Gaza has been under a blockade for many years: the last boat to arrive was 41 years ago. They made their fourth attempt during the attack on Gaza, and this time, the boat was destroyed. The crew and cargo of the fifth, Spirit of Humanity, have just been seized by the Israeli government who have imprisoned those on board, including the Nobel Peace prize winner, Mairead Corrigan Maguire, and sequestered or destroyed the toys, medicines and tree seedlings. But our message continues to spread.

Then there is the music. In the beginning of November 2008, the Popular Committee Against the Siege organized a candle-lit protest carried out by young children in Gaza City to protest at the closure of the power station providing electricity to the northern Gaza Strip. The protest started only minutes after the main Gaza power station shut down and the entire city was plunged into total darkness. Gaza’s residents started marching alongside the children in the city’s streets while the children held candles, singing in both, English and Arabic. Indeed, kids are the light of hope of Gaza, when they call for the freedom that comes through peaceful means. The people of Gaza are finding their own ways of struggling against this inhumane collective punishment.

Many people who don’t know Gaza reckon that we live under some kind of Hamas-Taliban Puritanical rule. It is’t true, and we are proud to have been involved in what we called the first ‘opera show’ ever in Gaza, starring an Italian artist who was willing to come over on one of these boats.  On November 27 2008, this concert, ‘Sing for Freedom’, organized by a group of young people in the Gaza Strip, was a great success. The aim was to find a new way of breaking the siege, through a resilience that young people can discover together through song, dance, poetry, and hip-hop, announcing to their audience and to the world that their spirit is strong, and that they will never give up their demand to live in freedom, justice and peace in Palestine.