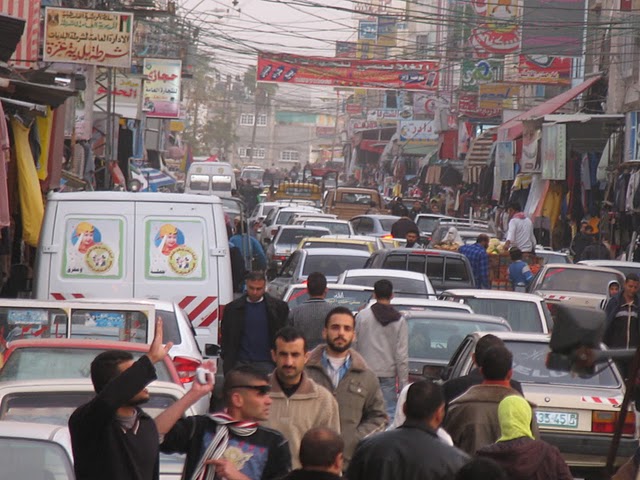 If you are a Palestinian living in Gaza, your first priority as you get up in the morning will be politics. If you are me, you will scour the latest news on al Jazeera followed by several other news outlets – maybe Al Arabiya, BBC Arabic or Al Hurra News. What Gazans are looking for is any news they can get on the siege: when will Israel be lifting it? Any end in sight to the drudgery of our daily existence under this blockade?

Tuning into local radios is a compulsive habit for nearly 90% of Gaza residents. In the car, at work, in the hospitals, in the shops or at your house, blaring radios will be your constant companion.

Tune in and hear various familiar anchors reading headlines from newspapers or online websites. Abu Hasan on Al Manar  – a private radio station – is a favourite, because he is a journalist free from factional bias. His shows are funny: pulling no punches about our Gazan suffering, offering the occasional quiz prize, or canvassing people’s views on the political issue of the day.

There are ten radio stations in Gaza but apart from a couple of privately-owned outlets, or those like Alwan or Gaza FM devoted to music – all of them are linked to political factions: Al Quds radio for Islamic Jihad, Al Aqsa Radio for Hamas, Palestine Radio for Popular (the Popular Front to Liberate Palestine).  Al Aqsa will tell you that the government is doing everything it can, and that the last war in Gaza was our victory. But all are preoccupied with the same themes – the ups and downs of the siege, the likelihood or not of them opening the crossing and allowing aid into Gaza. Indeed, these radios cannot be so different from those in China or North Korea. They carry what the factions want people to hear. It’s just a mini-version of state-controlled-media!

Breakfast, listening to the radio, will consist of a cup of tea with humous or falafel – no eggs, milk or butter, certainly no cornflakes. You get ready to go to work or if you are one of many who have lost their jobs in Israel, to take coffee or tea with your mates in central Gaza City. Even if you are jobless you can’t bear to stay at home, as the power cut means nothing works from fans to shaving to computers. Take a taxi in Gaza, and invariably you will get trapped in a massive gridlock of unorganized traffic. The police try and sort out the mess but at rush hour, they can’t cope.

As you sit there, look around you at the garbage piling up at every corner in each street or main road. Thanks to the shortage of municipality and communal services, the garbage, once collected daily is now picked up only twice a week. But containers for garbage can hardly be found. You are assailed by bad smells and bad hygiene on all sides. No recycling is taking place at all.  But you ignore all this, because undoubtedly, while you are in this car, all you will speak about is politics, politics and politics.

I’ve taken a taxi ride with Mustafa T. (he’d rather not give his real name) – a security officer with the security apparatuses linked to the PA, the government in Ramallah. He doesn’t mind about not having a proper breakfast. He goes to sleep around 2 am and wakes up around 1 pm. It seems to me that he would rather not talk about the future. He still takes his salary from the government in Ramallah, although he doesn’t work. Yet, he is not happy and he is eager for a change.  What kind of change is really possible in this Gaza quagmire?, I ask. Mustafa doesn’t disagree:

“After working at the preventive security apparatuses for a time, I started my Diploma in Media. But, as conditions got worse I started to look for a way out. I have paid out more than $5000 trying to obtain visas for Europe. Alas, it’s come to nothing. The last attempt I made was two months ago – I applied for an English language college in Manchester. I was denied a visa. That was it. I feel I have huge energy but I don’t know how to invest it. Gaza is like a jail without a jailer, or like a jail without a key. You are imprisoned without going to court, let alone a fair trial, and in the end you are left without a sentence. We can only await the unknown.”

Mustafa was getting upset thinking about it. He is 23 years old, but his furrowed brow seems to me to be more like that of a man in his mid-thirties. We arrive at our destination, east of Gaza City and go to meet Nahed al Dahood. He used to work in Israel, until the outbreak of the second Intifada, when he and hundreds of thousands of other Palestinians were denied work in Israel. They were all left dependant on aid, after being used to earning over 300NIS a day (nearly £51). His income is now nearer to $1 – 5 a day: sometimes nothing:

“I have seven children, three study at university while four are at school. Their fees are paid by charities. Our living expenses are low. We get food aid from UNRWA and other organizations. But I don’t want to live like this any more. I’m physically and mentally able to shoulder my family’s expenses, but this will never happen until all politicians, in Gaza and in Israel, are speaking from the same page.”

When you return home, nothing will have changed from the way you left things in the early morning, except this time the blackout means the whole neighbourhood is plunged in darkness. You make your way through the dark rooms, by candlelight. As summer progresses, the temperature soars as high in Gaza as it does in its politics, this year reaching over 43 degrees for the first time. So people turn around and go back into the streets to chat, drink tea, or smoke Shisha. Two blokes I come across are amazed that I have returned to Gaza from England. They cannot imagine what has possessed me.

Girls in Gaza seem far-removed from our political preoccupations: they have turned their attention to the Turkish romantic movies and daily tv soaps served up by the Saudi-owned MBC tv channel, much descried in the Arab press for being un-Islamic, but still available. Recently, some young guys have started to watch the same escapist dramas. Maybe surrogate lives are a good alternative if you are fed up with politics. Reem Rezeq, is 24, a former student who can’t get work. She is bored stiff:

“The routine is killing! We simply re-do what we did yesterday. There is nothing new in Gaza. No action. Whenever and wherever you go you find people talking politics. I have three brothers: two of them are Hamas supporters, while the third is Fateh. They spend most of their time on about who is wrong and who is right. Sometimes fights break out between them. To avoid this, I spend as much of my time as I can sleeping, or I try to read some stories, or watch TV, if the power is on…”

As power is always cut while the houses are as hot as ovens, people leave their houses and sit at their front doors. Once they might have gone to the seashore, but now, up until the small hours, the streets will be filled with people. Tonight, I meet up with some friends who are smoking Shisha with an apple taste. I last about ten minutes at this since I’m not used to smoking Shisha, and soon become a source of fun for the guys as they maintain that young children smoke more professionally than I do. But when I join them, the politics stops. One or two of them belong to political factions and they don’t want any trouble. They will only say that they hope conditions would soon change for the better.

One of them made a point that struck me forcibly: “We have always smoked Shisha. It’s an old custom. But what’s new now for the past two or three years is that you see more and more young and old people in Gaza who are addicted. They all take these Tramal drugs.”  Tramal is a tranquiliser, he told me, that people take to help them relax. It can make them so high that they don’t care any more about their surroundings. I tried to find out more. But, any in-depth investigation could be rather dangerous, as it seems that there are huge networks and high profile people engaged in this new business!

Meanwhile, children too are plunged in politics. In the power cuts, the little ones go to sleep earlier, but the older ones are out on the streets till late. Children who not so long ago were traumatized by the Israeli invasions and bombing attacks, these days are prey to the rival factions – Fateh and Hamas. They too are up to their elbows in arguments and debates about their respective manifestos. Of course they’re not so sophisticated. There’s a lot of ‘I’m Hamas’ or ‘I’m Fateh.’ But that’s not all. Many say that they hope to destroy the Jewish state. They don’t discriminate between an Israeli or a Jew.  When you ask them, “What scares you?” They will answer, “Jews with their guns.”